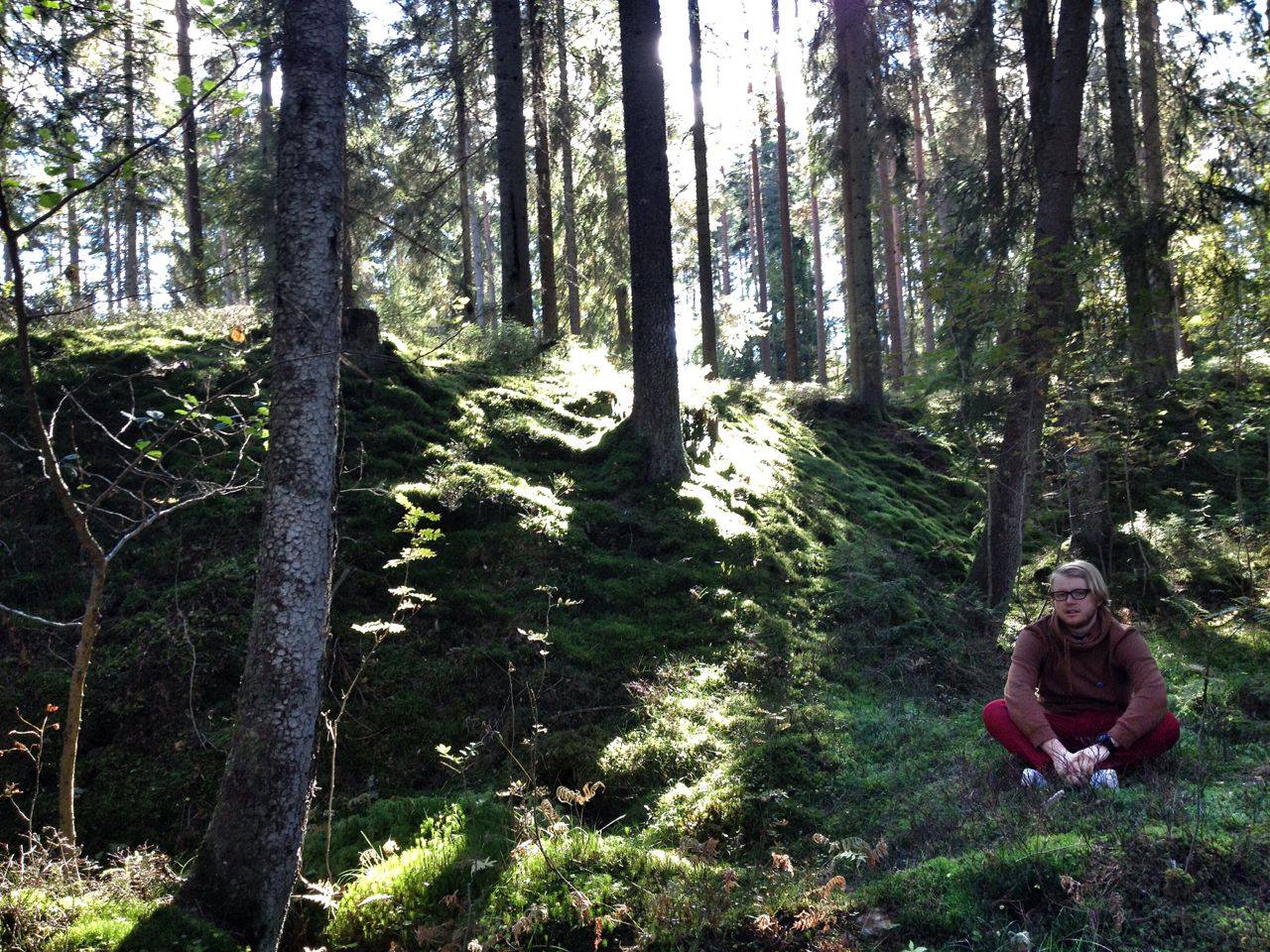 The road so far – crossing Europe on Nordic-Skates – part 2

September 29, 2013
Day 23. We started with a slow morning which is kind of appropriate for Sunday. Before start the skates needed a little work because one of the brake systems fell off yesterday evening. We are a little short on shims, so we are using old bearings instead. The day went on quite good till we lost Karlis. He was skating on a bicycle road which on one point moved away from the road and thus from us. In the end of course we found each other but it was after an hour long wait on our part. The second stretch of today’s route took Karlis by surprise with it’s uneven asphalt which is more than ok for cars but not suited for roller skiers. This road took a lot out of Karlis so today he could skate „only“ 105km. And again we have found an unorthodox place for camping. We are spending this night by a railroad tracks near a small station. Who can say that it’s wrong? And even if someone can, we don’t care. 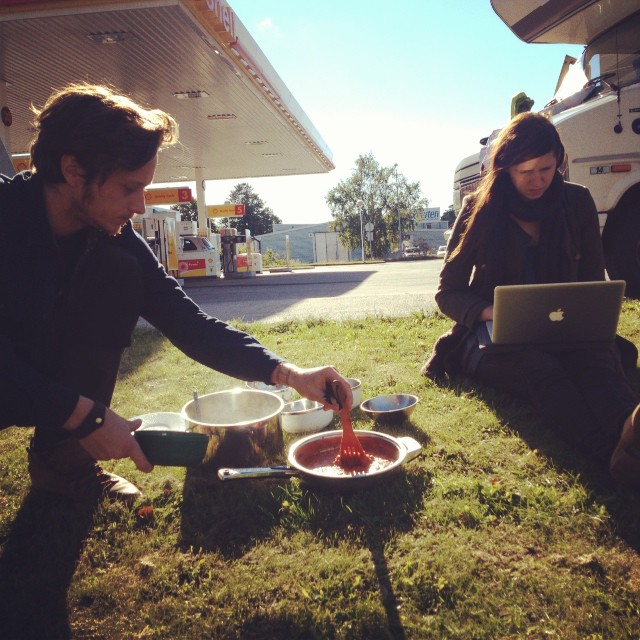 September 30, 2013
Day 24. Today we woke up by a railway station and went to explore the two locomotives parked nearby. From the look of them they have  been forgotten here for a long time. One of them was made in 1926. Although the morning was a bit cold the day was just perfect ­ the sun heated the air to +20 degrees, so we lost some layers of clothing. We were crossing the region of Smaland today ­ the home of Lindgren’s Emil and a lot of horses. It looks like this is some kind of horse breeding region. Our route took us through Halmstad where we prepared and ate our lunch at Shell petrol station like true road punks. After lunch we took off in the direction of Helsingborg ­ our last stop in Sweden and gateway to Denmark. During the second part of the day we saw a lot of wind turbines which seamlessly blended in with the otherwise rural scenery. The not so fun fact of today is that by our latest calculations our house is burning almost 16l of fuel per 100km. It is a bit more than we anticipated and because of this we have already spent almost 1/2 of the fuel budget after only 1/3 of our route. For Karlis today’s route was quite easy, because mostly it was flat. Only one stretch of downhill ride caused a bit of a problem ­ after riding on the uneven asphalt for some time Karlis legs became numb, but it was only for a short while. We are spending the night at Angelholm,parked at the seaside and surrounded by a tribe of wild rabbits. It’s just magical where the road can take you if you let it. 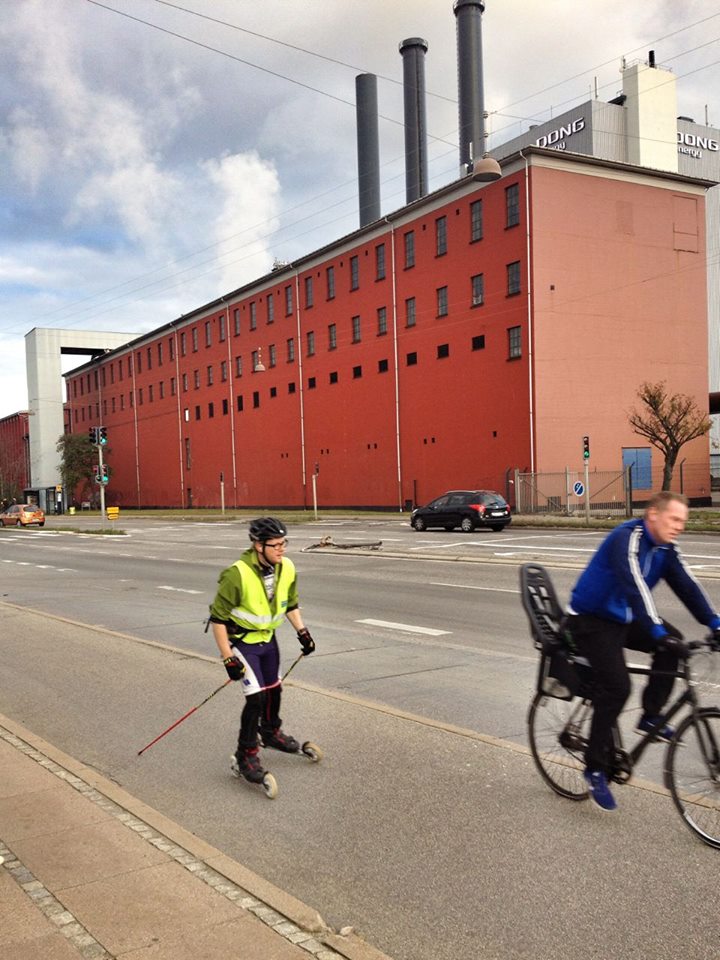 October 1, 2013
Day 25. We had a magical morning on the pier of Angels hill city (Angelholm) drinking coffee and watching the medusas pass by. After that our road took us to Helsingborg from where we finally took off form Sweden. No offense to this beautiful country but enough is enough. After a short ferry ride we arrived in  Helsingor, Denmark and instantly got amazed by the biking culture of this country, which is very nice for Karlis, because bicycles are more skater friendly than cars and trucks. We reached Copenhagen by a small seaside road and regrettably passed through this cool city with no stops. But that’s ok, because we are not on a sightseeing trip ­ we are on the road and the road goes on. Though skating on bicycle roads is easier and faster than in the road traffic you still have to respect the traffic lights, so the ride through cities took a bit longer than we expected. Today Karlis made 105km after which we returned to Copenhagen to stay with a friend of Zane. Malu welcomed our freaky crew into her nice home no questions asked, so today we will spend the night in a bit larger quarters than we are used to. We hope that our motorhome won’t take offense for this.

October 2, 2013
Day 26. This morning totally broke our habits and customs. Our hostess Malou had prepared a royal breakfast with boiled eggs and bread straight form the oven and we all sat around a white table and used real tableware. It was unusual for road punks like us. Then we spent some hours in Copenhagen filming our new video which we hope is online by now. Check out if Karlis got a tattoo. After that our route took us to the Storebaeltsbroen bridge which is the 4th longest suspension bridge in the world. Sadly Karlis was not allowed to cross the bridge on skates, so we smuggled him across in the camper, and maybe it was a good thing after all, because it was so windy on the bridge that we felt like our motorhome will be blown into the Great Belt channel, so crossing on skates would almost definitely result in an unpleasant swim for Karlis. Because of the late start once again Karlis had to skate after sunset, but in Denmark it’s a bit safer because of the extensive bicycle roads infrastructure. Though we were running late, Karlis insisted on going on until at least 100km, so our route length deficit of approx. 40km won’t improved. He’s determined to reach Gibraltar in 60 days with no excuses.

October 3, 2013
Day 27. There’s not much to say about this day. It was a bit flat and gray. The one thing worth mentioning is that today we kind of fixed the camper window that got into an argument with a bus stop yesterday. Now we have a new window made of cardboard box, garbage bag and some duct tape and the writing in it says „Road punks“, which we are. We had our lunch in a place with a bit funny name Middelfart (we apologize to the good people of Middelfart for all the jokes we made on the account of their home town) and there we stayed in a five star hotel …. ’s parking lot. At least it had a good view of the hotel. The second part of the  day turned out to be windy and cold, so Karlis stopped the camper and demanded the second pair of pants with a text „It’s frickin freezing.“ It’s interesting how fast you can forget the rough conditions and adjust to nice weather ­ though the wind feels freezing at the moment, compared to Nordkapp it is like a summer breeze but still a strong one. For the last 20km Karlis was struggling against the wind and after total of 112km admitted that he’s a bit tired and would like to call it a day.

October 4, 2013
Day 28. Today we crossed yet another border and left Denmark behind. As we approached the border of Germany the bicycle road got worse and worse. Karlis thought that this is a plot of Danish government to prevent danes from leaving the country by bike. The only thing that indicated the border between the two countries was a humble sign. It feels like as we travel further South the borders become more and more blurry. The North of Germany is not much different from the South of Denmark and the only thing that indicates that we are in another country is the language written on the road signs and spoken in gas stations. Also it seems that Germans are more in a hurry than the people of the North. They drive faster and are more dissatisfied with a guy skating on their lane of the road. It  seems that in Germany Karlis will have to use only bicycle roads because today he got a lot of horn signals and even yelling directed at him. Again the wind was not in favor to our skater so he made 100km today. Still it’s enough not to fall behind on our schedule.

To be continued in part 4